Well, I've had a busy couple of weeks! Two different balls, two completely different costumes — so much sewing and preparation, I haven't had a lot of time for blogging. Time to catch up!

Two Saturdays ago, I attended the Gaskell Ball in Oakland, wearing a dress I made and wore for the first time last year, but never properly photographed. This time around, I had my husband take a ton of photos so I could share them here. 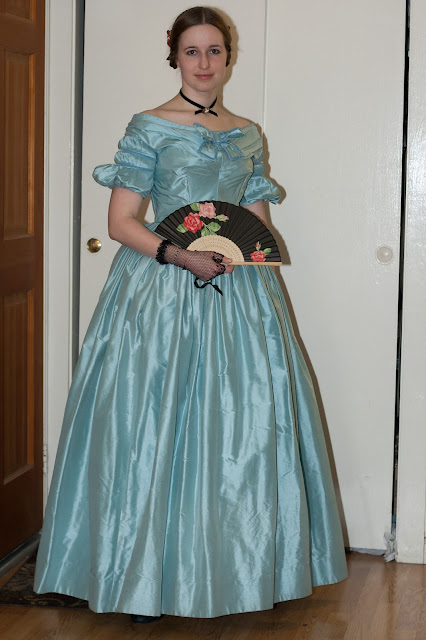 There is a bit of back story to this dress — it has has actually been through a few incarnations. I bought the fabric about 4 years ago to make my very first "Victorian" ball gown. It was also the first large sewing project I tackled when I started sewing again after college. Fearless and over-confident in my meager abilities, I bought 5 yards of very nice blue silk shantung and jumped right in. I had no idea what I was doing, but managed to pull off a fairly accurate-ish 1850s gown that I wore a few times, re-trimming it over and over again with varying degrees of success. The skirt was made to fit over a (rather too large) round hoop, and the bodice was draped with the help of a friend, but never fit well enough for my taste. I can't seem to find a single decent picture of the early incarnations of this dress. (This is why I started this blog, so I won't wear costumes without photographing them!)

After re-trimming it for the third or fourth time, I grew tired of the thing, and tossed it in the closet. I then made a series of new ball gowns, most of which were made to fit over a gigantic mid-1860s elliptical crinoline, and forgot about the blue dress entirely.

Last year, I decided to take a break from large hoop skirts and made a series of petticoats that would suit the 1830s and 1840s. I wanted a ball gown to wear with them for the summer Gaskells, but I didn't have time to plan and make a whole new dress. Just when I was starting to contemplate wearing one of my old dresses instead, I happened to find 1-1/2 yards of the same blue silk shantung at a remnant sale at the shop where I originally purchased my fabric. The universe seemed to be telling me to resuscitate the blue ballgown languishing in the back of my closet. I snatched up the remnant and got to work. I used the skirt from my original dress (3 panels of the 54" wide silk), but shortened it and pleated it to a new waistband. The remnant of silk became a new late 1830s bodice and I had a brand new (looking) dress!

My goal was to achieve that slightly frilly, yet relatively restrained look that served as a transition from the over-the-top Romanticism of the 1830s and the tight, angular Gothic sensibility of the 1840s. The style of my dress fits into a narrow window of about 1837-1840, when the giant gigot sleeve of the mid-1830s had collapsed, pleated tightly to the upper arm, but with fullness retained just above the elbow. Here's a fashion plate illustrating the silhouette: 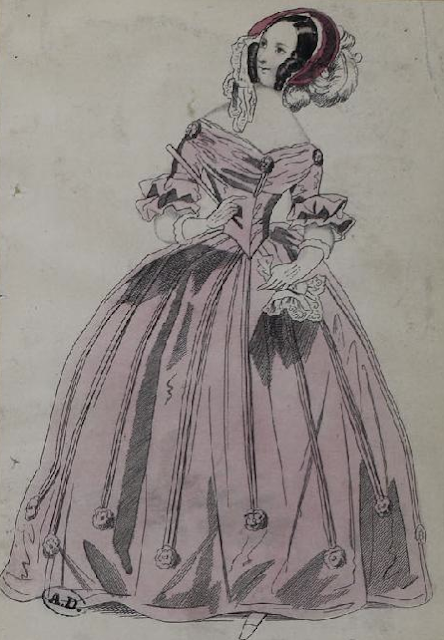 My bodice is taken from the Truly Victorian Romantic Era dress pattern (TV455), but with a sleeve I drafted myself. Without the pleating on the upper arm, the sleeve would be simply a giant puff. All the extra fullness is controlled on top with narrow knife pleats that were stitched in place before the sleeve was made up, leaving a puff at the bottom. I covered the stitching lines with bands of a not-quite-matching blue velvet ribbon, which I also used to trim the bow on the front of the dress. 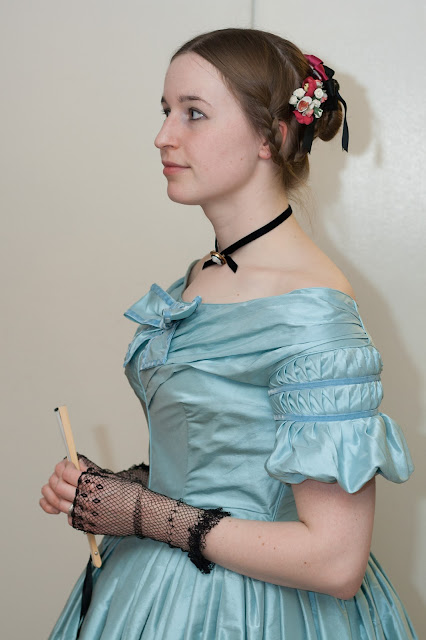 The dress was made in a hurry, and the pattern was easy and well-drafted (I've really come to expect that from Truly Victorian). It actually fits me a bit better than it looks in these pictures — my corset was laced a bit tighter than it should have been. I used hook-and-eye tape for the back closure, the first time I've done such a thing for a period dress. Apparently it is less incorrect than it seems. Anyway, it worked and was faster than sewing the hooks and eyes one at a time. 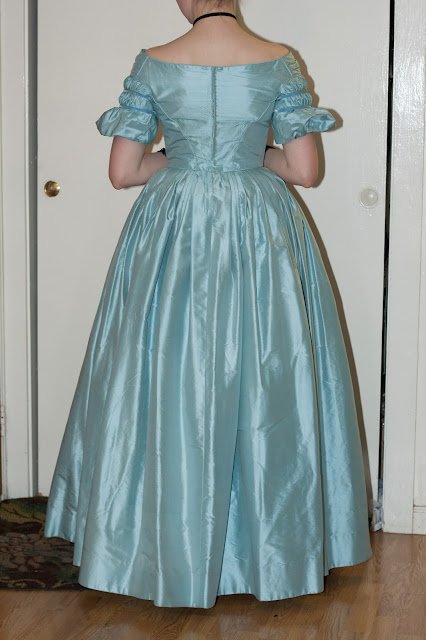 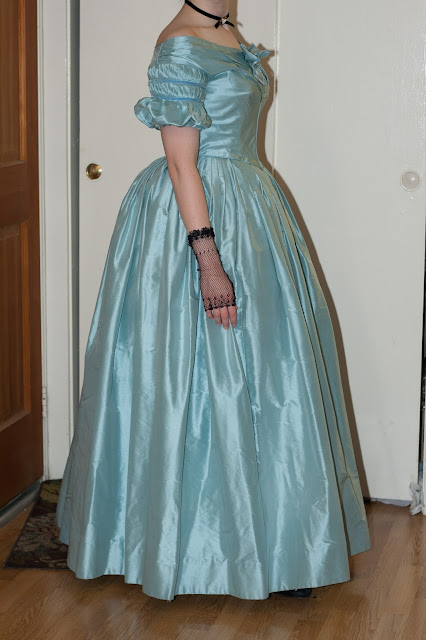 The black netted silk mitts were purchased from Lacis in Berkeley. The store owner told me that they were commissioned for the store back in the 1970s, and were made using an old machine from the 19th century. Pretty fabulous, I think. They only cost $30, and held up perfectly to a night of vigorous dancing. 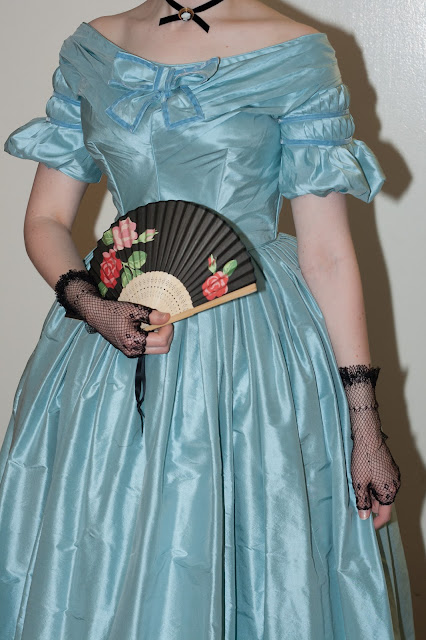 I am wearing a black velvet neck ribbon, fastened at the throat with my grandmother's cameo (which makes frequent appearances with my costumes). I don't know much about it, but I'm guessing by the style of the pin closure that it is from the 19th century. It has a small hinged loop that allows it to be worn as a pendant as well as a brooch. So versatile and appropriate.

I carried a cheap paper fan that happens to match my color scheme perfectly. (I bought a handful of these fans at Daiso last year —they are cheap enough that I wouldn't mind losing them, but work well for keeping me cool between dances.) 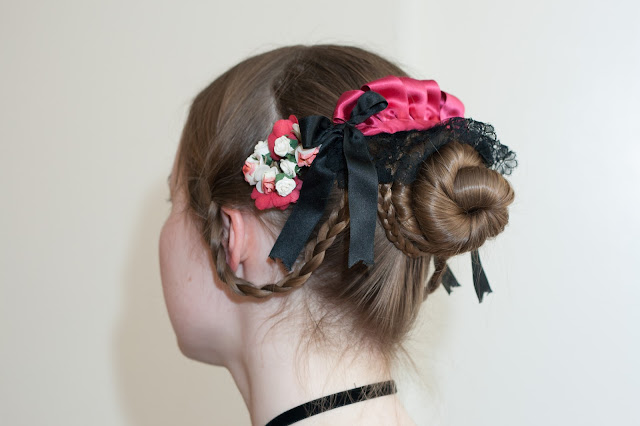 My headpiece is a recycled and re-trimmed bit of fluff — silk ribbons, assorted flowers, and a scrap of antique chantilly lace, stitched delicately onto a frame of covered millinery wire.

All those elements come together quite nicely, I think. The outfit was fun to wear and was just different enough from the typical 1850s cupcake dresses that are usually seen at Gaskells.

Curious about what's going on underneath that skirt? Underpinnings are coming up next!