While working on my Regency dress, I have also been planning my Gibson Girl evening gown. Since the turn-of-the-century/early Edwardian period is completely new to me, the first thing I did was to start training my eye to the fashionable silhouette of the period. My jumping-off point was the work of Charles Dana Gibson, an illustrator who made his name in the 1890s with his charming (and often satirical) drawings of people from all walks of life.

His most famous subject, of course, is the idealized young woman that came to bear his name: the Gibson Girl. What defines a Gibson Girl? She is decidedly upperclass, and exudes elegance and grace in everything she does. She is dignified and aloof, seemingly unconcerned with what is going on around her. She is occasionally depicted on her own, but is usually shown in the company of other people -- sometimes an elderly father or mother, more often a suitor. The other people in the drawings seem to serve one purpose: to highlight her beauty and elegance by contrast.
One more thing: the Gibson Girl is always impeccably dressed.

Here are a few images to give you an idea what I mean: 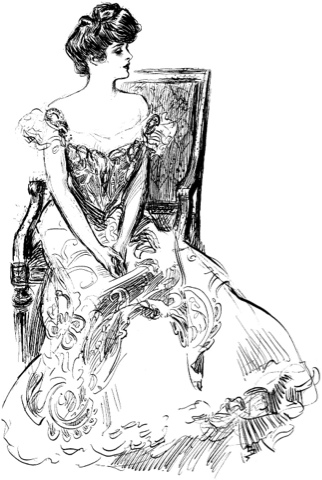 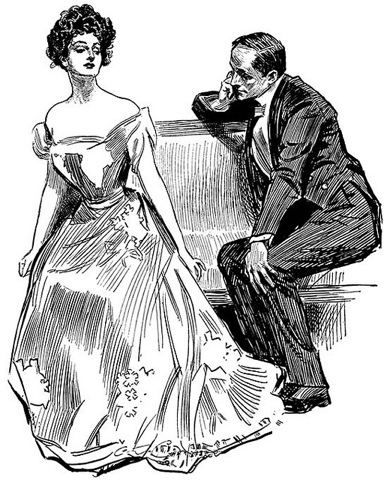 The gentleman is clearly eager to get her attention, but she seems determined to keep him at a distance. 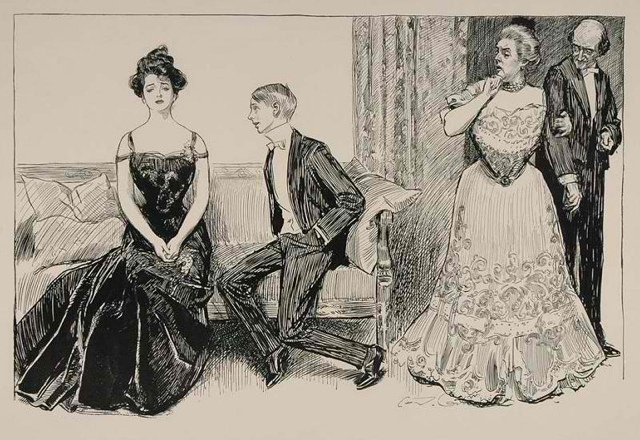 This is one of my favorite Gibson Girl illustrations. The silly-looking father and pompous mother look on as a gangly youth vies for the attention of their daughter. The young woman does not even appear to notice him, but seems focused instead on looking as beautiful as possible.


No wonder Gibson's illustrations were so popular; who wouldn't want to be a Gibson Girl? As I design and sew my evening gown, I'm going to keep this vision of dignified elegance in mind. It's best to set your standards high, right?


The Gibson illustrations capture a mood, but don't say much about the specifics of design. For that I turned to my go-to inspiration resources: fashion plates, period photos, and extant dresses in museum collections.

Once I started to dig into the details, I was able to pinpoint the specific years that most interest me: 1899-1903. In the late 1890s, skirts become very narrow while the torso started to develop a soft, almost droopy quality. Around the turn of the century, the narrow skirts started to swell at the hem into lush, sweeping trains, while the introduction of the S-bend corset allowed the curving shape of the torso to become even more exaggerated.

Here are some fashion plates that illustrate these trends: 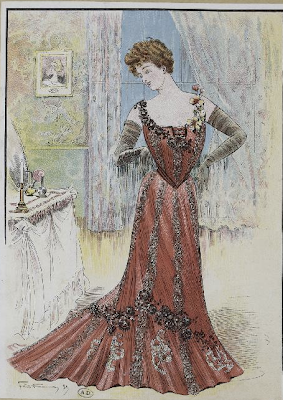 1899
This is the classic silhouette for the period: heart shaped bodice, skirt smooth over the hips with a dramatic flare below the knees. 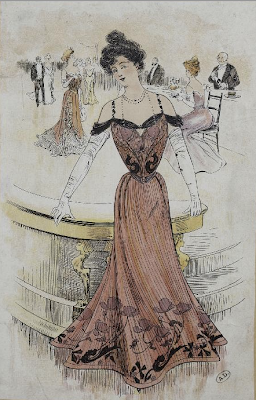 1900
Another great example of the fashionable silhouette. I love the strap/sleeve drapery on this one. 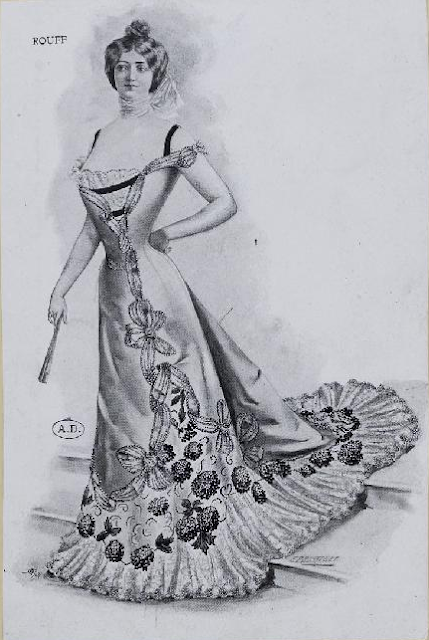 1900
This exemplifies the over-embellished, frilly look that was in vogue.

1900
This is a little simpler, but still shows the taste for soft, feminine details.

Now for some lovely fashion photographs from the period: 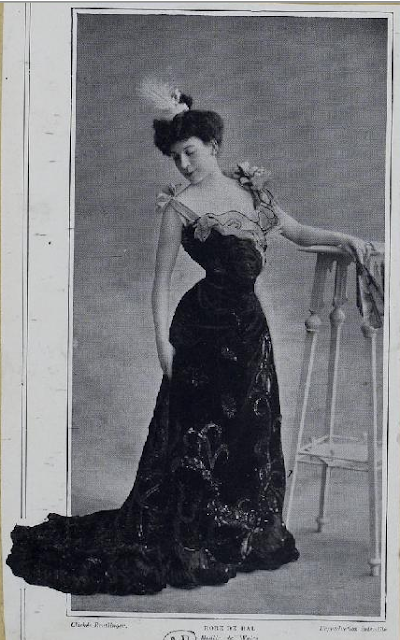 1901
The trimming on this one feels a little over-the-top, but I love it! Those straps are especially fun.

1901
This one is more elegant. Look closely at the bodice and you'll notice buttons below that lapel-like drape. Too cute. 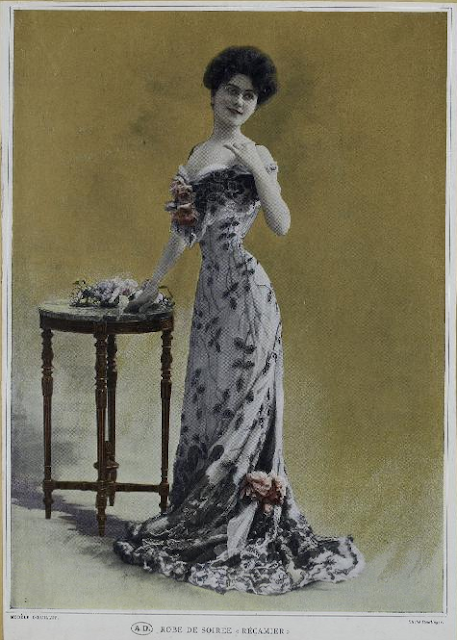 1901
Here's a great example of the trend towards fluffy embellishment on the chest area. It further emphasizes the low, rounded bustline that was popular in the period. 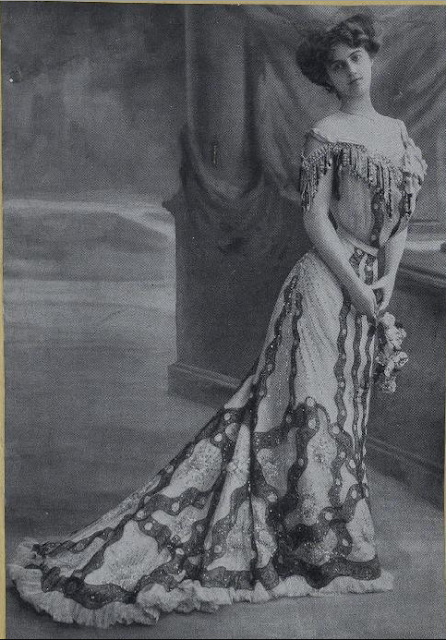 1902
This photo really shows the shape given by the straight-fronted corsets worn during this time. They push the ribcage forward and the hips back, creating a graceful (if somewhat unnatural) S-shaped curve. The rounded bust is again exaggerated with droopy trimming. 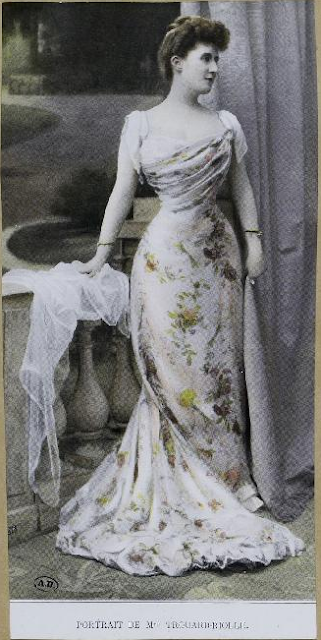 1903
This one shows the softly folded drapery that was trendy during this period. For those of you who have studied the fashions of the later Edwardian period (1910s), you know that this soft draped effect becomes even more popular in years to come.

Here are some museum dresses (all from the Metropolitan Museum — I strongly recommend following the links to their website where you can zoom in and see all kinds of amazing details): 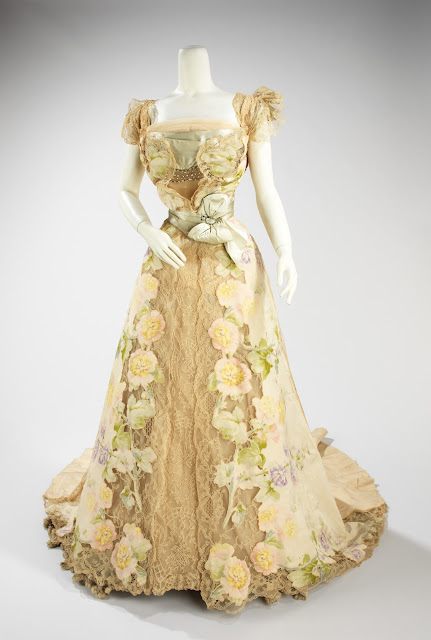 1902 House of Worth (more pictures)
The detail in this dress is astonishing. I especially love the soft folds of layered fabrics across the bodice. It takes a lot of work to make drapery look that effortless. 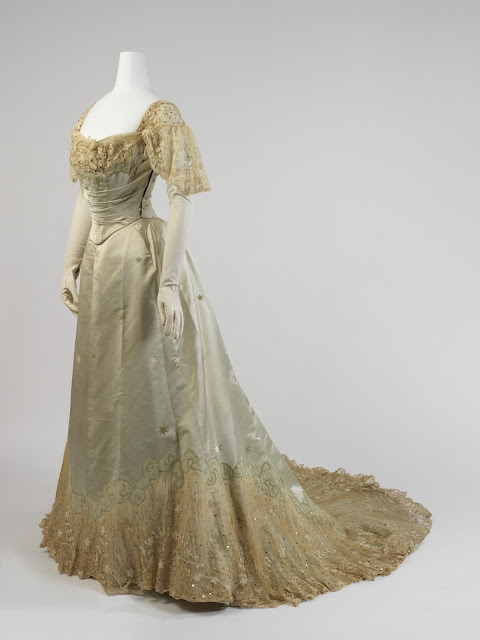 1898-1900 House of Worth (more pictures)
This one is also embellished beyond belief. The subtle star and cloud motifs give a pleasant texture, without distracting from the sweeping lines of the silhouette. Again, notice the soft draping across the bodice. 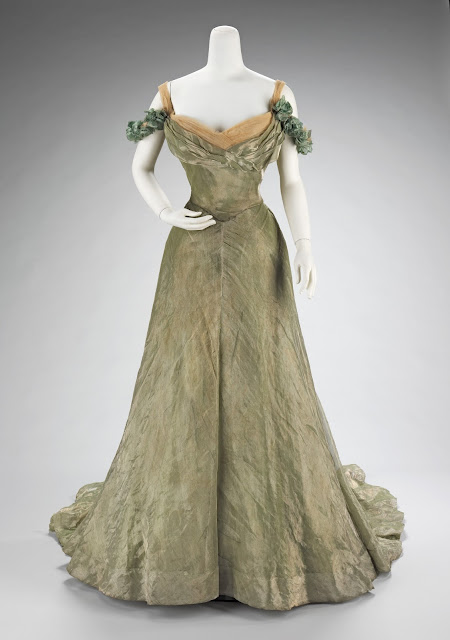 1898-1900 Jacques Doucet (more pictures)
This one is very simple in its embellishment, relying instead on a fabulous fabric to make an impression. I love the swags of flowers on the shoulders. 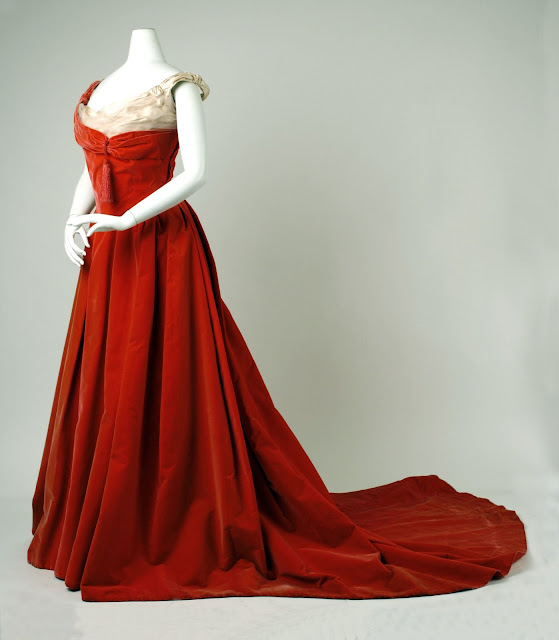 1898-1900 French (more pictures)
Just in case you were starting to think that every dress from this period was a soft pastel shade, here's a pop of color. Delicious red velvet does not need a lot of embellishment, just some gentle draping, a touch of tulle and satin, and that less-sexy-than-it-sounds bosom tassel. Love it.

The take-away from all of this is that I have my work cut out for me. Evening gowns from this era were far from simple, requiring precision fitting, skillful draping, and hopefully some interesting embellishment. But of course, none of this works without proper foundations. That curvy S-bend shape is anything but natural. 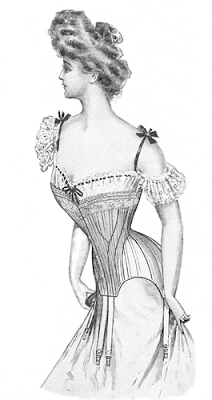 I've made a lot of progress on the Truly Victorian 1903 Edwardian Corset that I've been making for
HSF Challenge #3. I'll post some photos and more info once I have it completed!